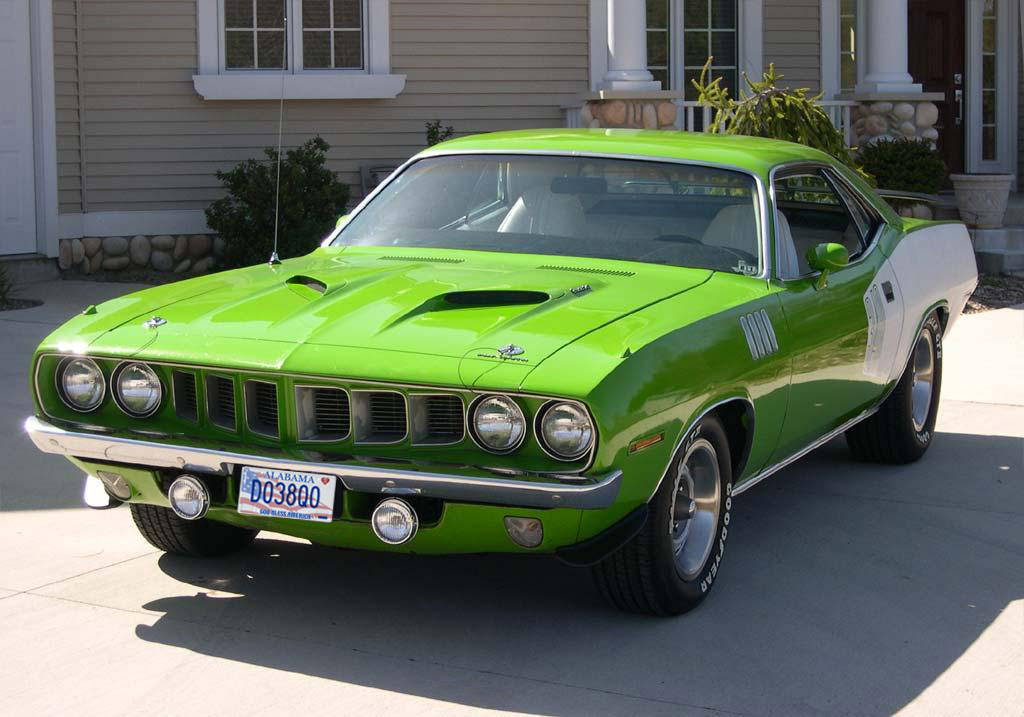 Barracuda was manufactured by Plymouth [Chrysler’s division] 1964-1974 period. The first Barracuda generation [1964-1966] was based on Plymouth Valiant and had a fastback body [A-platform] with a distinctive feature – wraparound back glass. Plymouth actually was the first to join “Pony” car family, but even though it was launched 2 weeks before Mustang, Mustang got all the spotlights, sales and public interest, so now we’ve got Ponies instead of Fishes. Besides, Barracuda name was suggested by John Samsen [Chrysler’s designer]. During 1964 powertrain was also taken from Valiant – the engines available were 2.8 liter [101 HP], 3.7 liter [145 HP] and most powerful Chrysler’s LA V8 – 4.5 litter [180 HP]. New options came with #273 engine with a 4 barrel carburetor – 235 HP. 1966 Barracuda receiced new tail lights, dashboard, larger bumpers, strong-grid grille. 1965 Barracuda is famous for it largest rear window ever produced – 14.4 ft2 [1,33 m2].

The second generation [1967-1969] was redesigned significantly even though was based on the same Valiant platform – Barracuda was available in fastback, convertible and notchback [three clear-separate areas: engine, passengers, and cargo]. Because of pony-class competition Plymouth began to rethink engine options for the muscle fish. In 1967 225 cubic [3.7 liter] was still base engine, but V8 had options in range – 2 to 4 barrel versions of 273cubic [4.5 liter] and 383cubic [6.3 liter] big block. In 1968 273cubic was replaced by 5.2 liter LA V8 – smallest available. Engine option range was also supplemented with brand new 340 cubic 5.6 liter block. 50 Baraccudas were equipped with 7 liter Super Stock Hemi, featured lightweight items and… was not for public roads… Mod Top – the vinyl roof covering was introduced as an option due to marketing performance in 1969. The ‘Cuda was Barracuda’s trim package [mostly non-functional embellishments to a vehicle.] was based on Formula S option: 340, 383 and 440 V8 Super Comando [7.2 liter].

1970-1974 fish got E-body and had its own platform with coupe and convertible bodies. Fastback body was deleted from the rage, so now Barracuda removed its similarity to Valiant. New model, designed by John E. Herlitz, was based on shorter Chrysler’s B platform [aka E-body]. Challenger had the same paltform, but it was 2 inched longer. There were 3 models available with E-body: base [BH], luxurious [BP] and sporty ‘ Cuda [BS]. Hemi- equipped cars had upgraded suspension. in 1971 Barracuda was slightly changed: new grille, taillights, seats, trim… Sagly, due to regulations, Barracuda lost its Big blocks. Smaller engines were detuned in order to reduce exhaust emission. Soon sales had dropped dramatically because of higher fuel prices and powerful cars insurance charges. Barracuda’s production ended in 1974.