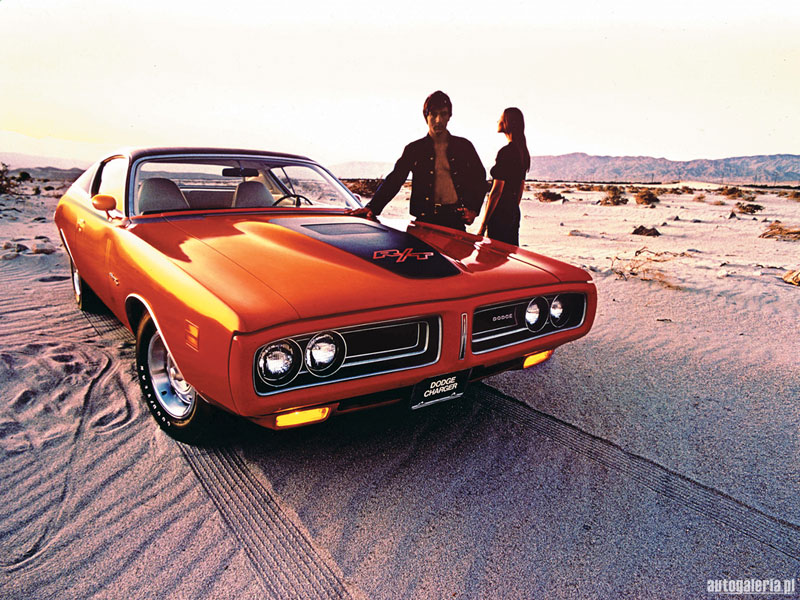 Real classics. Started in 1964 as concept car now Charger counts 6th generation. First one ranges from 1966 to 1967, when Dodge was desperate to present a car that could compete with Barracuda and Mustang. Almost 100% Coronet-based Charger was no original except full-width front grille that hides headlights. 318 cubic V8 [5.2 liter, 230 HP] seemed to be the right choice for default engine.

Second generation dates 1968-1970. This one made Charger look like Charger – the real default template of it. Some say, 69′  was the best looking car Chrysler has ever made. Some say – perfect. Under the skin, still, there was quite the same muscle: chassis, suspension, vinyl interior. Powertrains: same as in 67′ – 318 cubic V8 [230 HP], R/T – 440 cubic V8 [375 HP], 383 cubic and 467 Hemi. Transmissions: 2-3 speed manual, or 3-speed automatic. Chargers looked great both, with divided and not front grill, redesigned tail lights, etc. But it was an aerodynamic failure. It was unstabile at high speeds.  Dodge was to win Nascar, so they did the Charger 500 with front grille, back and roof changed. Aerodynamically 500 was quite to compete with the main rival – Ford Torino. Next step – Charger Daytona. Having slicker 500’s body, dropped fiberglass nose and huge rear spoiler for downforce. All this brutal design was an aerodynamical experiment that worked out – Daytona made 200 mph lap at Nascar’s.

1975-1977. The 4th Charger was a Chrysler Cordoba with a different grille, some powertrain variations. All in all 4th generation Chargers were so bad, that it almost disappeared, while first 3 generations [especially, 2nd one] still are collectors’ items.